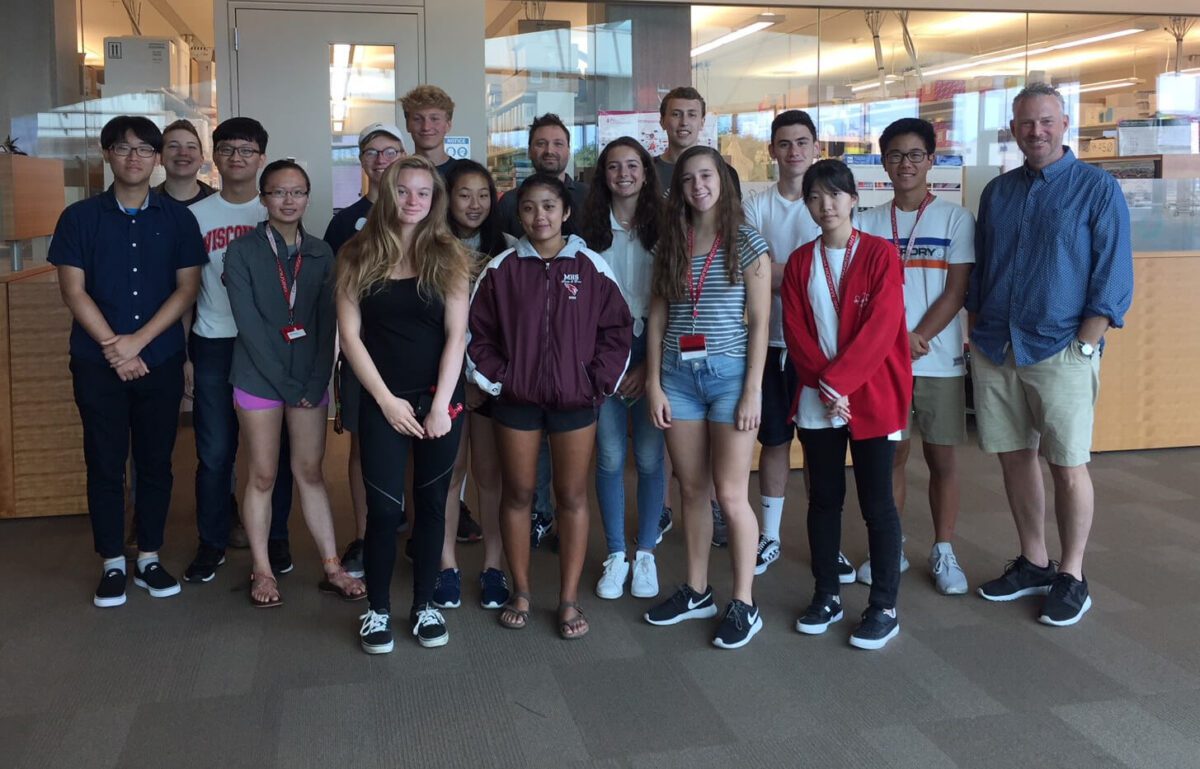 From the one-inch Etruscan shrew to the 300,000-pound blue whale, there’s a zoo in the University of Wisconsin–Madison Discovery Building: a zoo of cells. On a warm summer day, 15 high school students toured this cool lab menagerie, headed by world-renowned stem cell scientist James Thompson.

How’d these students get so lucky?

They were part of a Wisconsin Center for Academically Talented Youth (WCATY) precollege class called Human Body and Disease. After learning how Thompson’s lab is sequencing genes of the blue whale and working to cure vascular diseases, students ventured to a pathology lab at UW Hospital to see diseased organs.

“This is science in action,” said WCATY Director Olha Skyba of this advanced learning summer program, “and an unforgettable learning experience.”

A community of learners

“This is not a set of discreet programs. It’s really a community of excited learners,” said Skyba. “We celebrate ‘geekdom’ and develop our programs around curiosity and building relationships.”

“We’re not competing with what the schools do,” Skyba said. “We see WCATY as a supplement and great opportunity to leverage UW–Madison resources to benefit young students from across the state and beyond.”

The Wisconsin Center for Academically Talented Youth offers both day and residential programs during the summer, to develop students’ minds and emotional intelligence.

“They come the first time because they’re interested in certain subjects,” Skyba said. “But they return for their friends.”

Students study engineering, architecture, robotics, marine biology, forensic science, the law, and more. In some subjects, they dive deeper each year. For example, WCATY has six levels of computer science courses for students in grades 2-12.

In 2018, field trips ranged from Aldo Leopold Nature Center and Babcock Dairy Store to the Department of Physics and WKOW 27 News.

High school teachers or PhD students—with deep knowledge in their subject areas—teach the classes, many having been WCATY instructors for more than a decade.

In 2018 evaluations, 96% of students reported significant growth in content knowledge. But, as much as these bright kids love to learn, they also love the social aspect of WCATY.

“We have students who come back year after year, and some eventually become resident assistants in our residential programs,” Skyba said. “They find meaningful connections and make lasting friendships.”

‘A space where I can fit in and belong’

The Wisconsin Center for Academically Talented Youth seeks to cultivate academic talent in children from all cultural groups and across all economic backgrounds.

In 2018, a grant from the Wisconsin Department of Public Instruction provided more than $98,000 for low-income, high-ability students to attend WCATY summer programs. With additional financial aid, 130 students—25% of all who attended—received scholarships.

“I have been told by many people that I may save the world,” said Robin, a scholarship student. “I really want to, and that’s why science is important to me. Not only has WCATY provided me with an advanced learning experience that I would not have at school, it has also given me a space where I can fit in and belong.”

In 2019, the Wisconsin Center for Academically Talented Youth will pilot courses for college credit, helping students get ahead in their college careers.

The WCATY program already directs young learners toward career opportunities. Skyba relates the story of a young woman who was asked to join a competitive university lab after impressing a WCATY instructor. Other students say WCATY helped them discover their passions and have confidence to pursue a dream job.

A student named Alex said, “WCATY will help me in a competitive job market because, with the skills I’ve learned, I know I can be successful.”

More than career prep, however, the Wisconsin Center for Academically Talented Youth is about the love of learning.

“In some ways students don’t care what topic they’re talking about, as long as they’re doing in-depth discoveries together and making friends,” Skyba said. “The core connecting fabric is our super proud, super geeky community.”

For more information, see the program webpage or contact Olha Skyba at 608-890-3093 or olha.skyba@wisc.edu.