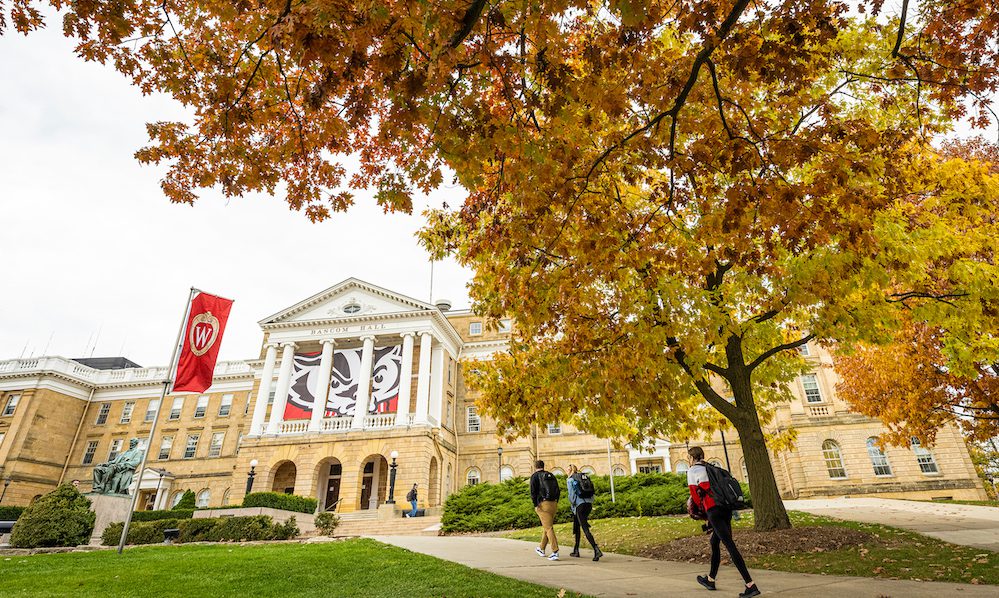 Badger Precollege helps students along their personal path to higher education, but don’t take our word for it. Below, a few of our former students — all of them now enrolled at the University of Wisconsin–Madison — share how Badger Precollege has helped them transition to life and learning in college.

At home as a Badger undergrad

Andrew Kruck’s Badger Precollege experience might best be described as eclectic. While in middle school, he explored topics in game design and stage magic. During summer STEP and ALP programs, he tackled courses in engineering, forensic science, political science and “extreme” physics.

Today he’s a college sophomore majoring in history and says his time at Badger Precollege was instrumental in his choice of both university and degree program.

“Badger Precollege made UW–Madison feel like my home,” he explains. “I appreciated my [precollege] time for helping me explore courses in majors that I didn’t end up pursuing. Though I enjoyed physics and engineering throughout high school, seeing different engineering courses through Badger Precollege made it very clear to me that I was passionate about history and writing and wanted to pursue [those subjects] in my major.”

Andrew attributes his experience rooming with international students in Badger Precollege with his decision to live in the International Learning Community during his freshman and sophomore years at UW, and says many of his closest friends today are those he met in his precollege programs.

“This is something I’m especially thankful for because my freshman year was [the first year of the] COVID-19 pandemic, and my entire first year was almost entirely online and without many good ways to meet people on campus.”

This summer, don’t be surprised to see Andrew back at Badger Precollege, this time as a counselor, where he hopes to help middle and high school students “get outside their comfort zone, meet new people and succeed academically in a collegiate environment.”

“This is something I’ve been hoping to do since I was a camper,” he says, “and I’m very excited to hopefully give new students the same valuable experience that I had when I was younger.”

Raising a hand for every opportunity

Mae Hurtado-Thiele remembers the moment during their STEP forensic science course that she became hooked on genetics.

“We were learning about blood typing and DNA,” recalls Mae, who uses she/they pronouns. “I was so incredibly fascinated by it all that my instructor recommended I read The Seven Daughters of Eve by Oxford geneticist Bryan Sykes. At Badger Precollege, we were encouraged to dive deeper into our passions and interests. If it wasn’t for that teacher, I may have never chosen genetics as a major.”

In their five years of precollege programs at UW, Mae explored a variety of science and critical thinking subjects and says she continues to use things she learned in those programs as an undergraduate. One especially useful lesson imparted: Raise your hand.

“One of the instructors explained how important it is to raise your hand because, in science, which is historically a male-dominated field, women are often silenced or intimidated,” Mae says. “I remember that advice every time I felt too shy to raise my hand in class — or in a giant 300-person lecture.”

Today Mae is double majoring in genetics and genomics and Spanish and continues to push themselves academically. She has already started work on their senior thesis project, works in the Biochemistry department’s Simcox Lab as well as the Berbee Walsh Department of Emergency Medicine and hopes to study abroad in Spain this summer.

“At the end of the day, I’m at UW–Madison because I want to earn a great education, but I can’t be successful if I’m not committed to learning.”

There are many things that make Nathan Wagner special. In addition to the coursework he’s currently taking at UW–Madison as a University Special student, Nathan has already made plans to spend his summer working on his first publication on neutral atom quantum computing at the Wisconsin Quantum Institute. Pretty remarkable when you consider that he’s still a senior in high school.

His love for physics, he says, was piqued in his five years at Badger Precollege. “Even though I was very focused on studying math in middle school, I decided to take a class in physics at ALP,” says Nathan. “During that class my teacher and colleagues had a profound impact on me, and I discovered a deep love for physics as a result.”

While he’s still waiting on his official acceptance to attend UW–Madison as an undergraduate this fall, Nathan says his experience with Badger Precollege has him feeling ready.

“Graduating high school is a lot easier knowing that I have already developed the skills to succeed in university,” he says. “From the opportunity to study topics in detail to the amazing community that you’ll find, Badger Precollege offers a lot of experiences that you won’t have normally.”

He advises middle and high school students to make the most of their precollege experience by registering for the residential programs — “the best experience I know of to learn about college life.” He says living on campus taught him about “dorm etiquette” and how to navigate successfully around the many campus buildings, a major change from high school.

“I think that now that I’ve spent a lot of time in a dorm during Badger Precollege, the transition from high school to college is going to be a lot easier.”

While sophomore Clara Zwolanek doesn’t credit Badger Precollege with her decision to become a Badger undergrad, she says it definitely influenced her decision to pursue engineering as a major.

Though she participated in a range of precollege courses — from human anatomy in STEP to Summer Music Clinic — it wasn’t until she took ALP’s Introduction to Civil Engineering course before her junior year in high school that the seeds of engineering were planted.

“Taking the [ALP] class showed me what aspects of engineering I enjoyed, and I eventually chose civil and environmental engineering as my major at UW–Madison,” she explains.

Beyond academics, Clara says her experience with Badger Precollege also gave her a leg up on her peers when it came to success as a college student.

“Attending Badger Precollege made the academic and social transition to UW–Madison very smooth. Unlike many of my peers, I knew what to expect when living in the dorms. It was also an easy transition to lectures and discussions as class structure was much like the precollege classes I had taken.”

While she’s moving forward in her undergraduate career — this semester she’s excited to be studying abroad at the National University of Singapore — she offers great advice to precollege students for building on that experience in college.

“Badger Precollege programs are a great way to prepare for college, but every campus is different. While meeting people and being part of a community is easy at [precollege] summer camps, it can be harder to meet people when starting your freshman year of college. Use the time you have in college to expand and talk with people you wouldn’t have met otherwise.”

We’re proud to have these stellar students in our Badger Precollege family!