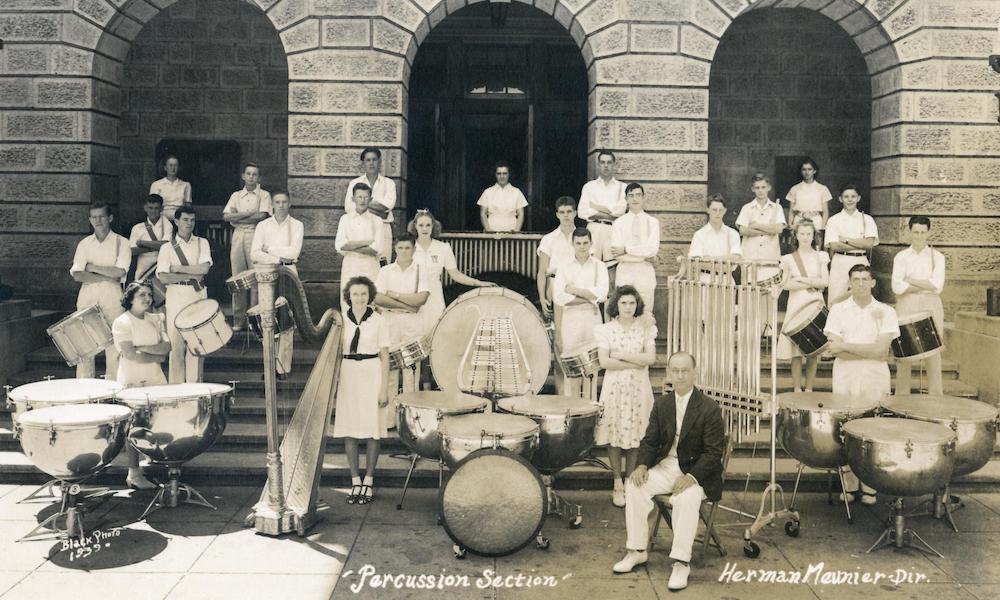 Since 1937, high school students who attend UW–Madison’s Summer Music Clinic have been eligible for the UW Tuition Waiver Award, which provides up to four years of college tuition for music and music education majors.

It was June 1991 when a young Tim Whalen sat down at a piano on the University of Wisconsin–Madison campus to audition for an award that would not only pay for pay his college tuition for four years but solidify his decision to become a professional musician.

The conditions for this moment were not ideal for the high school junior from Whitefish Bay, Wisconsin.

“I had sprained my ankle a few days earlier in a soccer game, so I remember having crutches at the audition,” Whalen recalls. He nevertheless rose to the occasion and earned the award. “I remember feeling very good about the audition — and so proud and happy to receive the tuition waiver.”

For Whalen, the award afforded him “the chance to get a great education at a wonderful university” and helped confirm the “subconscious” notion that he would become a professional musician. “Beyond all that,” Whalen says, “I mostly remember that week [at SMC] as a wonderful experience of making music and meeting people who I still consider friends to this day.”

In fact, it was with a number of those SMC friends — Al Falaschi, Courtney Larsen and Jon Schipper — that Whalen formed the funk group Phat Phunktion for a 1996 Battle of the Bands competition. Today, Phat Phunktion, which has performed with The Temptations, Chick Corea and Taj Mahal, continues to tour, even as its members have relocated around the country.

Whalen, who lives in Washington, DC, has been a member of the United States Army Band “Pershing’s Own” since 2010 and serves as the music director, keyboard player and arranger for its Downrange ensemble, a 10-piece popular music group. He’s also an active jazz pianist and composer and, like a number of those who’ve earned the UW Tuition Waiver Award, has even returned to teach at Summer Music Clinic a few times over the years.

“My favorite part of teaching [at Summer Music Clinic] has been directing the senior jazz ensemble,” he adds. “I enjoy directing ensembles most; that’s where I feel my most comfortable. It’s just plain fun.”

While not every recipient of the UW Tuition Waiver Award has gone on to a career in music, it has made a deep and valuable impact on music and music education in Wisconsin and beyond, says Summer Music Clinic’s program manager, Carrie Backman.

“The award has made a UW–Madison or UW–Milwaukee music education possible for hundreds of students,” Backman says. “The continuation of music as part of a well-rounded education at the collegiate level has proven valuable for all recipients. Students who go on to become musicians and music educators are given the gift of an education that allows them to grow and explore their passion. Students who pursue non-music careers benefit from an arts-focused education that enriches their lives.”

Adopted on June 18, 1937, by the UW–Madison Board of Regents as an award for high school students of “outstanding musical attainment and general scholarship,” the UW Tuition Waiver Award was expanded in 1957 to include attendance at UW–Milwaukee.

Today, students who are completing their junior year at a Wisconsin high school, attend Summer Music Clinic and will major in music or music education at UW–Madison’s Mead Witter School of Music or UW–Milwaukee’s Peck School of the Arts may apply for the UW Tuition Waiver Award. Two rounds of in-person auditions — in voice or an instrument — are required as part of the selection process.

Mimmi Fulmer, UW–Madison professor of voice and opera and SMC instructor, has evaluated a number of vocal auditions for the UW Tuition Waiver Award over the years. She says the program has had a fundamental effect on both the School of Music and the award recipients.

“[The tuition waiver] provides a transformative opportunity to young musicians to explore the role music plays in their lives and contribute leadership and skills to our ensembles and broader musical community,” says Fulmer. “Their contributions to the State of Wisconsin and larger world include careers as international performers, educators at all levels, community music leaders and knowledgeable supporters of the arts.”

Musician, composer and educator Shauncey Ali recalls feeling “a bit nervous” in 2000 when he auditioned for the tuition waiver award in the dim, cool room in UW–Madison’s George L. Mosse Humanities Building. By that point, he’d been auditioning for nearly a decade and had developed his own philosophy about the process, viewing it as a competition with himself rather than others.

“As a violist, I was always the underdog, and being unassuming was one of my greatest strengths,” he says.

Ali knew he loved music in college, “but it took me a while to envision how a career in music could look for me. Even then, the landscape for string careers was changing quickly, and the traditional routes weren’t tugging at my heart.”

Though he would go on to earn his degree in botany (at that time, a music degree was not required to receive the tuition waiver), he credits the award with helping him find his own musical path.

“The tuition waiver allowed me to explore other academic avenues while maintaining a strong relationship with the UW–Madison Symphony Orchestra as well as the opportunity to play under conductor David Becker, who greatly inspired me at a most impressionable time,” Ali explains. “Receiving the tuition award literally kept me playing classical music during a time when I was finding myself, developing my chops and navigating my future.”

That future path would come later, when he discovered traditional fiddle styles and began teaching kids. He continues this role today in his work as the director of MadFiddle, a Madison-based youth violin ensemble that explores and performs folk music from around the world. Ali has also written two books featuring fiddle compositions and is a member of the Katie McNally Trio.

Like Whalen, Ali has returned to teach at Summer Music Clinic over the years and will be teaching fiddle band at this year’s Senior Session for grades 9–12. He describes teaching at SMC as a “full-circle opportunity.”

“I see myself in the students and have experienced firsthand how influential these experiences can be,” he says. “If I can turn them onto a new style of music or a new way of seeing themselves through music, I’ll be lighting an important spark for them.”

High school students who are completing their junior year in 2022 may apply for this year’s UW Tuition Waiver Award and must enroll in Summer Music Clinic by May 15, 2022, to be eligible. Applications for the tuition waiver are due on June 1, 2022. For questions about Summer Music Clinic or the tuition waiver, please contact Carrie Backman at cjbackman@wisc.edu or 608-263-2242.